In honor of The Walking Dead’s return to television on Valentine’s Day, I’m going to take advantage to write a bit of a love letter, although belated, to one of my favorite characters:  Rick Grimes.

Now, considering the show’s massive success, I’m sure a lot of people love the character of Rick Grimes.  I mean come on, he’s a true Southern Gentleman and a lawman to boot.

Seriously though, what I love about the character of Rick Grimes is how we’re seeing the trauma that the whole zombie apocalypse thing is putting on his mind.  I have confessed numerous times in real life and on this site, that I am a fan of watching the hero become the villain.

And while Rick hasn’t quite become the villain yet, you do see how he’s getting a little rougher, a little tougher, and a hell of a lot more blood thirsty as time goes on.  I suppose it’s only natural, though.

Waking up in a hospital, half dead from dehydration and infection to find the world as you know it has ended around you is a big enough blow, let alone the fact that his best friend/partner has taken up with your wife and son.(Ouch, that stings)

Throughout the series we see him go from a typical upstanding lawman, who little by little loses his humanity.  What I liked the most about it, is how the show did it.

It’s quite smart in my opinion.  See, people don’t break over every little bad experience and transgression in their general direction.  Things build up, it’s a slow progression.  The pain, terror and God only knows what else you would be feeling slowly builds up until only a handful of deciding factors pushes you further and further away from who you are.

For those who don’t want the show, I’ll paraphrase so that I don’t ruin too much for you.

Long story short, Rick and the gang settle on a farm, where everything goes terribly because no one will listen to reason.  To put it lightly, there were too many Chiefs and not enough Indians in the group and it all came crashing down around their heads.

This lead to two things: 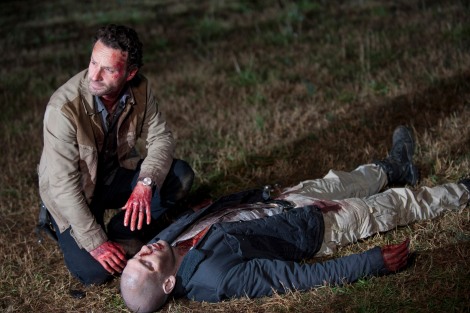 This is what happens Shane, when you meet a stranger in the Alps!

By the way, props to anyone who gets the joke in the above image, haha.

2.  The Group is no Longer a Democracy. 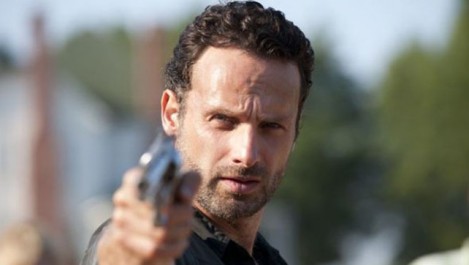 You’re confusing me with someone who gives a damn.

From there you start to see the more brutal and Machiavellian side to our gentle-by-choice leader.  I have to admit, I loved it.

From the farm, they find an abandoned prison where they decide to make camp.  It’s a brilliant idea, except for one little problem.  Laurie, Rick’s wife dies in childbirth and Rick understandably goes a little off the rails.

In the process he storms through the walker infested wing of the prison and destroys every single walker with nothing but a hatchet.  Or as I like to call it, the birth of being Rick Raged.

Never gonna give you up, never gonna let you live…

And props for that joke too, haha.

Moving on, as this post is starting to run long I’ll paraphrase the rest.

As more and more terrible things happen to this man, his will to survive pushes him farther and farther down the rabbit hole.

It’s only a matter of time  before this guy goes totally bananas and probably starts thinking he’s a walker himself, if something worse doesn’t happen first.

And you know what?  I’m more than okay with that.  This show is awesome and so is Rick!

I own no rights to the pictures used in this post, or the featured image, as they all belong to AMC.  If you own the photos, and want them taken down, please contact me.